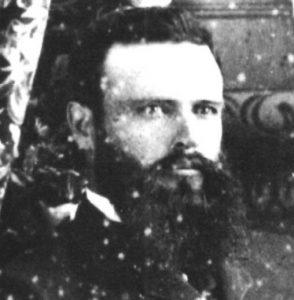 My family once owned a village in Manitoba, in the 1890’s. Several streets are still named after my family members. It is Rosenfeld, 100 kilometers south of Winnipeg. My great-grandfather, Alexander Acheson (1848-1897), grew up in Perth County, Ontario and received his teaching certification in Clinton, Huron County, Ontario. Teaching in Ontario was okay, but now married to Sarah “Sadie” Bradin Miller in 1877, he decided to join his younger sister, Arabella, and her husband, John McKennit, and head west. The new railroad had tracks that went as far as Winnipeg, so that was the destination. My great grandparents, with two babies tucked in arms, boarded the westbound in about 1880, for a new life.
Alexander’s first teaching position was in the Parish of St. Charlies, soon to be engulfed by the growing Winnipeg. The family was also growing, reaching seven children by 1891. Teaching must have been a good profession, for the family then purchased a full section of land further south, which also happened to include the tiny rail siding village of Rosenfeld. It then had two grain elevators, a warehouse and a scattering of residents, numbering some 70 souls – the arrival of nine Achesons was a real population explosion.
The boys set out to farm some of the land. Great granddad Alexander started the first school in Rosenfeld, as teacher and principal. Great grandma Sadie Acheson was an entrepreneur at heart and started the first general store in town. One reason for the success of the store was the large Mennonite settlement in the area – the “Rhineland” of Manitoba – with settlers clamoring for goods and supplies. The large family of nine needed growing space and Rosenfeld soon had its first two-storey dwelling (see photo).
To this day, Rosenfeld bears the names of my ancestors. Running north-south is Acheson Street. The cross streets include Alexander Avenue named after my great grandfather, Bredin Avenue named after my great grandmother’s Irish line, Henry Avenue after my g. grandmother’s mother’s maiden name and Gertie Avenue, likely for my Great Aunt Gertrude Acheson. All in the family.
Lost your password?