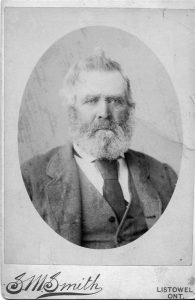 Joseph Acheson was our first Acheson ancestor to arrive in Canada and settle on new farmland in Ontario.

The sons of Weir Acheson, Joseph and his brother Alexander grew up and worked on the family farm in County Tyrone, Ireland. It was a tough life at any time, but devastating during the Irish Potato Family of the mid-1840’s. Joseph left Ireland for the promise of better times in America, only to be disappointed and he returned to the farm. Determined to try again, he brought his family to Canada where this time, Irish luck followed and the family prospered on farmland in Ontario.

The children grew up in Perth county, Ontario, married, and spread out across the continent.  Joseph got his teaching certificate and headed west to Manitoba. Weir and Arabella headed across the border, to California. Samuel stayed on the family farm, while Elizabeth remained back in Ireland. 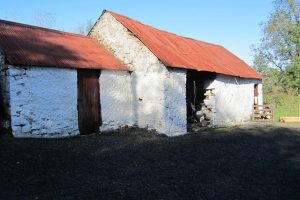 Little is known about Joseph’s early life.1 The family may have been relatively well-off compared to others, using the family name and connections. However, County Tyrone is a rural area of North Ireland, landlocked away from sea harvests and very dependent on cattle, sheep and potato harvests. Not much else is known of Joseph and the family holdings at that time. The Griffith’s Land Valuation2 mentions several Achesons in the parish of West Longfield. Carried out between 1848 and 1864 under the direction of Sir Richard Griffith, this survey of Ireland was intended to determine the amount of tax each person should pay towards the support of the poor within their poor law union.

In the townland of Collow in the parish of West Longfield, where his father Weir had lived, Joseph and his brother Alexander were land renters from Thomas Auchinleck, a landowner. There was a Thomas Auchinleck of Tyrone county who was the High Sherriff of County Tyrone in 1872 and was a captain of the Tyrone Fusiliers. He lived at Crevenagh House in County Omagh.

Together, the two brothers leased 98 acres of land with a dwelling and likely a stable and their own tenant. That amount of land was sizable back then and the two brothers would have been considered ‘large farmers’, each paying some £13 annually. A Bernard McAree also rented a house and garden plot from them for ten shillings, it covering only 30 perches in area, or about 900 square yards.

Both Joseph and Isabella were born and raised in County Tyrone over in Ireland in the early 1800’s. She was six years the younger, having been born in 1821, and passed away in Donegal, Perth county in Ontario at the age of 66, in 1887.

They married in late 1845 and presumably set up a homestead in Tyrone county with Joseph likely as a tenant farmer raising what he could: potatoes, cattle or sheep.

That autumn was the start of a major disaster for the Irish island. A blight on the potato crops, lasting for three years, caused widespread starvation of families, loses of farmland and rising desertion of the countryside. Those that could, would emigrate across the Atlantic to save their families.

The Achesons had emigrated from Ireland to the United States by 1848, since their first (known) child, Alexander, was born in New York City in November of that year.

The incoming Irish arrivals faced a gauntlet of con men upon disembarkation. Immediately upon arrival in New York harbour, they were met by Irishmen known as ‘runners’ speaking in Gaelic and promising to ‘help’ their fellow countrymen. Many of the new arrivals, quite frightened at the mere prospect of America, gladly accepted. Those who hesitated were usually bullied into submission. The runner’s first con was to suggest a good place to stay in New York; a boarding house operated by a friend, supposedly with good meals and comfortable rooms at very affordable rates, including free storage of any luggage.

The boarding houses were actually filthy hell-holes in lower Manhattan. Instead of comfortable rooms, the confused arrivals were shoved into vermin-infested hovels with eight or ten other unfortunate souls, at prices three or four times higher than what they had been told. They remained as ‘boarders’ until their money ran out at which time their luggage was confiscated for back-rent and they were tossed out into the streets, homeless and penniless.

The penniless Irish who remained in Manhattan stayed crowded together close to the docks where they sought work as unskilled dock workers. They found cheap housing wherever they could, with many families living in musty cellars. Abandoned houses near the waterfront that once belonged to wealthy merchants were converted into crowded tenements. Shoddy wooded tenements also sprang up overnight in yards and back alleys to be rented out room by room at high prices. Similar to Boston, New York experienced a high rate of infant mortality and a dramatic rise in crime as men and boys cooped-up in squalid shanties let off steam by drinking and getting in fights.

The number in Joseph and Isabella’s family went up and down with their moves to various areas. As bride and groom they had emigrated to New York after their marriage in Ireland in 1845, carrying the Family Bible presented to Isabella (McKennit) as a prenuptial gift from a Mary T. Miller on January 1, 1844. By the time the young couple left New York, their first son’s birth was recorded in that Bible: Alexander in 1848.

Return to the Irish Homestead

Why Joseph Acheson returned to his home parish, Lower Langfield, in northern Ireland is not known; perhaps for an inheritance as the Achesons always seemed to have money for education (Alexander, when married with two tots, went back to school for at least three years). He may have been summoned home; his father Weir died two years later in 1854. More likely, the farmer Joseph Acheson from rural Tyrone County was disillusioned with the hustle of the big American city.

While back in Ireland, the couple had one another son, Weir, and three daughters; Ellen, Elizabeth and Arabella, and one more son, Samuel; and that was the last time all the family was together.

By the time the Achesons left for Canada in 1863, Ellen had died and Elizabeth, only nine, for some strange reason, possibly concern for her health on such a voyage, was left in Ireland. Elizabeth married Thomas Phillips in 1878, a widower and innkeeper. Her marriage registry image is in the family photo album. So our great grandparents arrived in Canada with only four of their six children.

By the mid-1800’s, Canada was promoting the immigration of farming families from overseas, particularly from the British Iles. Even the Irish were welcomed to help open up new farming communities in central Ontario.

For the first winter the Achesons lived with the Buchanans who had come to Canada in 1847. Tombstones in Donegal cemetery show inter-marriages between these two prominent Ontario families.

When the Achesons moved from the Buchanan home, it was to a rented farm (Joseph first rented Con. 7, Lot 29; then Con. 10, Lot 28, both in Elma township), but Perth county census indicates that sometime in the later 1870’s, Joseph Acheson went from a tenant to being a freeholder, having purchased a one-hundred acre farm near Donegal, on Con. 9, Lot 35, Elma township.

He moved no more, but now his children, except his youngest son Samuel, were restless and on the move. 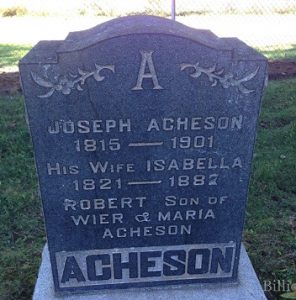 The Final Years for Joseph

Joseph passed away at the age of 85. He and Isabella are buried together at the Greenwood cemetery in Milverton, Perth county in Ontario.