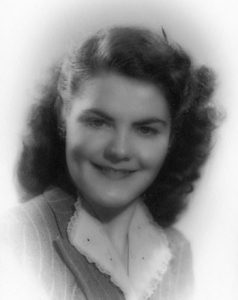 Vera Edna Webber was born February 17, 1924 in the Calgary General Hospital, the seventh of eight children of Joseph and Sarah Isabella Webber. She was named for uncle Joseph Acheson’s aristocratic wife, Edna Vera Osborne, in the vain hope of a substantial donation to the family coffers.

She engaged in school activities at Bankview, Mount Royal, Sunalta, Connaught, C.C.I. and Western, played clarinet and saxophone with the Calgary Native Boy’s Band and was one of the first drum-majorettes in Western Canada.

Edna first worked at the Bank of Nova Scotia, West End branch, Calgary and the Main Branch in Winnipeg. Then went on to the oil patch in Edmonton and Calgary which led to her and sister Gertrude’s ten-day trek via Pontiac across the USA, complete with hammer in the glove compartment. They headed west to Seattle instead of east to New York, took two days to cross Chicago (a detour took them back to the same motel they stayed at in the night before). 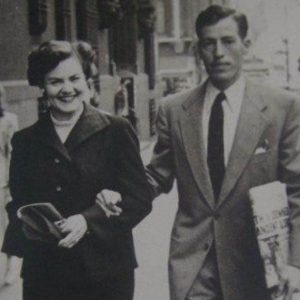 Edna and Bob Keene in NYC day after getting married – 1954.

In New York she joined forces with Robert William Keene, a London Merchant Marine Master Mariner. They married in New York on February 27, 1954 and very quickly, albeit rather late in life, produced six children.

– Source for above: “Who’s That Sitting in our Family Tree?” by Gertrude (Webber) Lawrie
Lost your password?