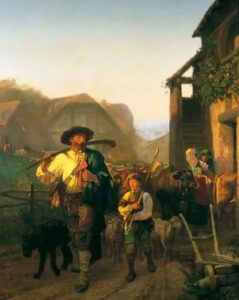 Alsatian father off to war

There is little source information on Georg Weber (1759-1832).  His predecessors are also lacking any documentation at this time.  All other information on birth, death and children were provided by correspondence from Richard Baechler.1

French Reign of Terror and the “Great Flight” from Alsace2

The French Revolution in 1789 affected Alsace no less than it affected all of France and all of Europe. In Alsace, many citizens were executed in the guillotine during the Reign of Terror. The church was suppressed. In Soufflenheim, just 24 kilometers east of Mertzwiller, the church was burned, destroying the church records. 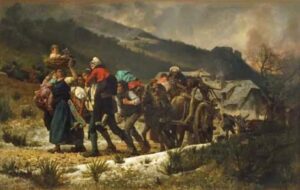 In October 1793, Prussia and Austria invaded northern Alsace, as part of their campaign to restore the French monarchy. The French Army drove the invaders out, and then the French Revolutionary government threatened reprisals against the Alsatian population, whom they accused of being German collaborators. Alarmed, many people left their homes in Alsace and headed east and north into German territories such as Baden and the Palatinate. This is known as la Grande Fuite, “the Great Flight.”

Perhaps 40,000 people fled, which would represent nearly 10% of the population of Bas-Rhin (northern Alsace). Most of the refugees were from the districts of Wissembourg and Hagenau (11 kilometers southeast of Mertzwiller). The French government made several half-hearted decrees allowing the refugees to return, but many conditions were specified which made returning unfeasible for many. Finally, in 1799, the French government allowed the unconditional return of the refugees, but most returned impoverished and unable to reclaim their former property.

Marriage of his son, George

Image from the marriage register for his son, George Weber.
Translation: Legitimate son of George weber, ????, profession of laborer, domiciled at Mertzwiller, Bas-Rhin, age of 71 years, and son of Anna Marie Meyer.

Researchers record either spelling, depending on their source material, or by duplicating from other family searchers.  The ‘Georg’ version was contained in material from Richard Baechler.  Both Georg Weber and his son George Weber put their signature on the marriage register, mentioned next, and it looks like Weber Sr. signs without the ‘e’.  See the image on the right; the son signing first and then the father signing below, and judge for yourself.  And it makes it easier to separate the two ancestors.