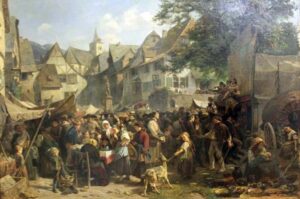 Alsace is a green strip between the Vosges Mountains and the Rhine Valley, once a Celtic settlement, but in modern times tugged between France and Germany. The Treaty of Westphalia in 1648 ceded her to France, but Germany kept claiming her as booty in wars. She was then captured by Germany when Otto von Bismarck won the Franco-Prussian War in 1870.
In 1827, when George was a young lad, the government imposed the Forest Code of 1827.  Although his occupation was as a journalist,1 this act had a huge impact on the people of the Bas-Rhin region, encouraging emigration to North America.  It greatly restricted the rights of access to the forests that the people had known for generations.  Such rights, needed for family living, included the gathering of wood for heating and cooking, land for cattle grazing and hunting for wild boar and deer.  The wild boar were then ruining cereal and potato crops. 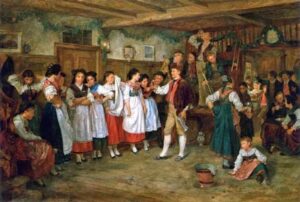 Margaretha was a daughter of Joseph Muckensturn and Maria Anna Eitheidinger and was born at Mertzwiller on 15 Feb 1806.

George and Margaretha were married in 1830.  Their marriage bann was recorded on January 3 and the marriage took place in Mertzwiller on January 18.

The Final Years for George