Alsace is a green strip between the Vosges Mountains and the Rhine Valley, once a Celtic settlement, but in modern times tugged between France and Germany. The Treaty of Westphalia in 1648 ceded her to France, but Germany kept claiming her as booty in wars. She was still with France when Joseph and Catherina first sailed to Quebec, but Germany got her when Otto von Bismarck won the Franco-Prussian War in 187Letters to Home.

Alsace had two large emigration movements; first in 1800 to 1820, going to the Odessa region of Russia, then followed  in the 1840 to 1850 period, going to America.  Joseph took part in this second period, emigrating to North America and first arriving in Quebec, where he would be comfortable in speaking French.

Joseph was the fifth child in the family of eight children.  The village of Mertzwiller is in the contested region between France and Germany, and the two countries will war over this territory since the 17th century.  Up until Joseph’s time, the region was all agricultural.  In the 19th century, industry had arrived with textile factories and forging mills.

Catherine Ritter was born on 5 Aug 1835 in Mertzwiller, Bas-Rhin, Alsace, France. She was the daughter of Michael Ritter and Barbe Roth. Catherine was a widow of Michael Eichedinger prior to marrying Joseph. She passed away at her home in Hanover, Ontario on 14 Feb 1901.

Joseph and Catherine came to Canada from the Alsace area in the mid-1800’s, settling in the Quebec region, probably because they spoke little English but were fluent in French and German. Joseph was likely in Quebec in a semi-military capacity, as England was encouraging soldiers from Europe to settle near Quebec’s unprotected southern border. 3

At the outbreak of the Franco-Prussian War in 1870, Joseph, a high-ranking military man according to his son, Rusey Weber, was called home to Alsace. Germany was the victor and so Joseph and his family were under German rule from 1871 until they again emigrated to Canada in April of 1886, this time to settle near relatives in the area that was later incorporated (1899) as the town of Hanover.

To Canada for Good

Hanover, Ontario has many solid brick homes and is beautiful in the summer. At the end of the 19th century, the main employer was the Knechtel Furniture Company (now absorbed by Sklar) where Joseph worked as a furniture finisher.
He was also an artist, apparently. As well as his regular work at Knechtel, Joseph was commissioned to make posters for the railway to attract immigrants to Canada. These were unsigned and so impossible to trace.

My dear brother, I take pen in hand to write a few lines, I am in good health and hope that my letter you will find you, your wife and children as healthy. That He leaves me, my dear brother, I have already written twice and I’ve never had any response to my letters, I do not see why you do not write. Ais I do things wrong so that you would like to me. About the bad guys, we’re so far away. One of the other we can not do any throwing a stone in the garden of the other, and if once I have hurts, I beg you to forgive me. My dear brother, I want to send news of my situation in America, I had barely time when my wife passed away three years ago, I am now a widower for 3 years when my wife died. My eldest daughter came to live in my house last year. 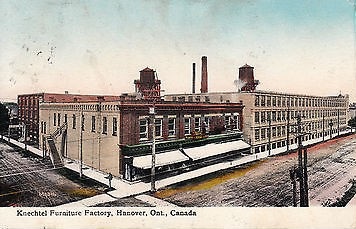 The Knechtel Furniture Company originated in 1864 when Daniel Knechtel traveled to Western Ontario to build furniture and other wood products for the settlers in the area. Knechtel found enough success with his furniture business to build a factory and employ more than 30 workers within the next decade.
In the 1880s, the company also operated a short-lived retail store that sold groceries and clothing, as well as furniture. The store front even offered undertaking services and a hearse for hire. The business expanded to a large brick building, which a fire destroyed in 1900. The company soon rebuilt and resumed business, continuing to expand the factory to accommodate increasing business.


The Final Years for Joseph and Catherine

After Catherine passed away, Joseph had been spending much of his time in Preston at his son’s house, Joseph Jr.

The obituary for Joseph Weber appeared in the May 9th, 1907 issue of the Hanover Post newspaper and gave his death as the fifth of May, 1907 in Preston, Ontario.  The notice was brief: Joseph and Catherine are both buried in the Hanover Roman Catholic graveyard, in Plot #13. The gravesite records are in the Town Hall. Interestingly, the next plot #14 is for the Burns family. Tommy Burns, the only Canadian to win the World Heavyweight Championship, in 1906, was possibly a nephew of Joseph Weber, a family story to be proven sometime in the future. Tommy likely worked in the same furniture factory as a young man.