Eve Gass was born before 1668 in the Bas-Rhin region of Alsace.  She and Michael were married by 1686 and raised three known children.  Her parents were Jacob or Jacques Gass and Anna Hugel Hucq.  she died in 1704, and Michael lived another seven years. 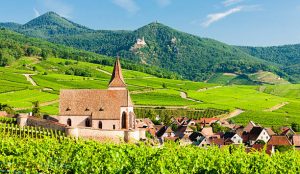 The parents of Michael Weber had experienced major upheavals in Alsace with the conquest by the Kingdom of France, as a side conflict within the Thirty Years’ War (1618-1648). The warfare caused massive numbers of the countryside population to die or to flee. This resulted in an influx of immigrants arriving from Switzerland, Germany, Austria, Lorraine, Savoy and other areas after 1648, up to the mid-18th century. Strasbourg became a main centre of the early Anabaptist movement, due to Swiss Anabaptist refugees between 1671 and 1711.

France occupied Strasbourg in an unprovoked action in 1681. Alsace remained largely German in culture, education and government for another 60 years, until the French Revolution in 1789.2