Descendants of the Weber/Webber Family

From Alsace to Canada 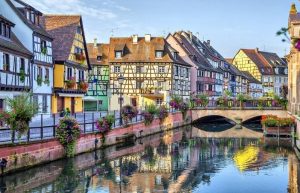 The origin of the surname Weber is obscured in antiquity, but it is likely derived from the German noun meaning “weaver”. Our Weber ancestors have been traced back to Alsace, a small region that borders on Germany and France, and has been claimed and conquered by each side over centuries of wars.

Our earliest record is for a Jacob Weber, who lived in the Bas-Rhin district of Alsace in the 1600’s and his son Michael Weber. The Canadian branch of the Weber family, with Joseph Weber, arrived in about 1860’s in Quebec, then settled in Ontario after 1890. His son Emil ‘Rusey’ Weber migrated to Manitoba in 1902, marrying Sarah ‘Sadie’ Acheson. and where he anglicized the family surname to Webber during World War One.

The family line from Jacob to Rusey

The Alsace Weber line was derived from genealogy research by Richard Baechler, a native Alsatian living in France, and donated to the author in 2011.  This work is dedicated to his contribution.
Lost your password?